Last week on the CorvAIRCRAFT list we debated what happens when your OT-10 cam is retarded 4 degrees. I ran the following scenarios through Dyno2000, all using the 3100cc "Big Boy" engine's parameters, which are nothing more than a stock 110hp Corvair with an OT-10 cam and increased displacement. I would expect similar results for the stock 110 engine using the OT-10, but yielding proportionally smaller numbers. Torque is green and horsepower is red. The following plots are rather informative.

Cam retarded four degrees with relation to the crankshaft (and all below are from also from crankshaft).

Cam neither retarded nor advanced.

Cam advanced ten degrees. Torque at 3500 rpm is 194 foot pounds (the max available from advancing the cam), and hp is 129. This looks like the "hot ticket" to me.

Cam advanced fourteen degrees, the equivalent of one tooth off. Things are starting to head downhill from here, if you need to spin a small propeller fast.

This is what you'd get if you RETARDED the cam by exactly one tooth. Much lower torque AND power.

The conclusions that I draw from the above plots are that something like 4 to 10 degrees of cam advance is perfect for MY engine at the RPMs I plan to run (cruise at 3400 or so). Not only is hp and torque higher than with no advance, volumetric efficiency improves from 78.2 percent to 84.7 percent (at 10 degrees). Now the question is, what is the downside? Obviously top end suffers, but we direct drive airplane guys don't care one bit about that, because we'll never get there. The OT-10 cam tag says that "for most applications the cam is run at 2 to 6 degrees advanced". That tells me that I'm on the right track, and that there's nothing wrong with going with 8 or 10 degrees of advance, if my application requires a strong bottom end. It also tells me that for airplane guys, one of those nifty offset woodroof keys good for 4 degrees of advance is certainly a step in the right direction. And if somebody told me I could gain 2% more torque by simply installing a $17 offset key between cam and gear, I'd be all over it. I degreed my cam to see what it really was in MY installation, and determined that my cam is advanced 6 degrees. This is fantastic news, since if I had the choice I'd either advance it 4 or 6 degrees!

The accuracy of Dyno2000's predictions with the stock 110hp Corvair leads me to believe that these plots are a true indication of the trends that one would expect by advancing the cam. One thing I DID notice though is that by fooling around with the induction system you can shift the peaks of these curves left or right. So this is not the definitive word, because induction systems are so different... 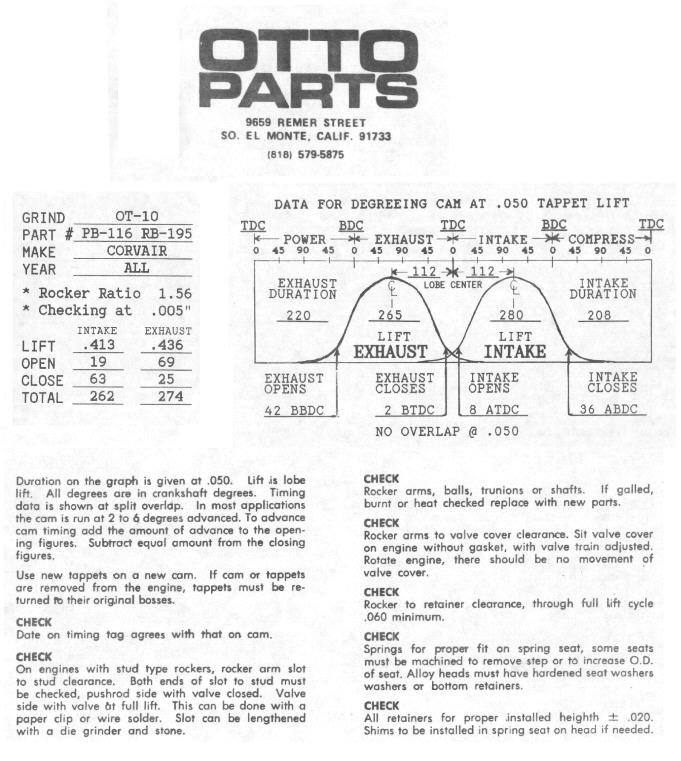 Anybody ever notice how the lift figures are reversed between the specs to the left and the plot on the right? This worried me a bit, until I ran it through Dyno2000 and ascertained that it really didn't make much difference which one was which. Max difference was either one hp or one lb-ft of torque at 3500 rpm.

Everything below this line is stuff that I stole from the web and pasted in to help ya'll understand what's going on in the above charts.


A. LOBE PROFILE - The contour of the cam lobe which determines how far above the base circle a lifter is moved and for how long it is held off the base circle.

C. CAM LIFT - The maximum distance the cam profile will raise the lifter above the base circle.

G. .050" DURATION - .050" duration is measured in CRANKSHAFT degrees from the point where the lifter rises .050" from the base circle on the opening side of the cam lobe to the point on the closing side of the lobe where the lifter drops to .050" from the base circle. The .050" duration is todays most common standard for measuring duration.

I. LOBE CENTERLINE - An imaginary line that goes from the center of the base circle through the point of maximum lift on a lobe.

J. INTAKE LOBE CENTERLINE - The number of CRANKSHAFT degrees from TDC (with the lifter in the middle of overlap) to the intake lobe centerline.

L. OVERLAP - Overlap is the angle in CRANKSHAFT degrees when both intake and exhaust valves are open at the same time. This is at the end of the exhaust stroke and the beginning of the intake stroke. INCREASING the duration will usually increase the overlap. Overlap must be specified at a lifter or valve lift value.

O. .050" CAM TIMING - .050" timing is a reference point indicating where the intake and exhaust valves open and close. This is measured in CRANKSHAFT degrees at the point where the lifter rises .050" from the base circle on the opening side of the cam lobe, (valve opening reference), and the point on the closing side of the cam lobe where the lifter drops to .050" from the base circle, (valve closing reference). Note that these reference points are the same points that the .050" duration figures come from, only these are in reference to position of the piston in the cylinder near TDC or BDC. The specifications are given in the following form:
INTAKE OPEN -5 BTC = before top dead center
INTAKE CLOSE 29 ABC = after bottom dead center
EXHAUST OPEN 44 BBC = before bottom dead center
EXHAUST CLOSE -10 ATC = after top dead center
NOTE: When a (-) minus symbol is used, then use the opposite heading. (BTC -5 = 5 ATC)

The four stroke engine is the backbone of the automotive and racing industries. Yet the basic scientific concepts of volumetric efficiency, thermal efficiency and mechanical efficiency and how they relate to engine performance is not well known.

It is pretty common knowledge among "car guys" that the pistons move up and down in the cylinders and that the valves open and close to create cycles. The four strokes (or cycles) that the engine uses are also common knowledge to car guys. This page provides you with the fundamentals of engine science and will take some of the mystery out of making more horsepower with a four stroke engine.

POWER SOURCE
An engine is just a machine that converts fuel energy to a rotating motion, which is commonly measured as horsepower. In the engine, gasoline is added to the air as it passes through the carburetor (or fuel injectors) on its way to the cylinder. This mixture is then burned in the cylinder, creating heat which creates pressure. This pressure pushes the piston down in the cylinder to turn the crank shaft.

Now, to the science part. Fuel has a chemical energy. A typical pound of gasoline contains 19,000 to 20,000 Btu. Just like 12 inches equals one foot, it is given that 2,545 Btu per hour = 1 horsepower. Therefore, the power output is directly related to how much fuel the engine can effectively burn. Now, don't run out and put bigger jets in you carb trying to make more power. If the fuel/air mixture is too rich it won't burn properly and you will make less power.

VOLUMETRIC EFFICIENCY
Imagine that you have a 100 cubic inch single cylinder engine. On the intake stroke, the piston moves to the bottom of the cylinder and creates a volume that is 100 cubic inches. The fuel/air mixture that fills this volume is what will be used to create the power.

Now imagine that this engine has some type of restricted intake, such as a small carburetor or restrictor plate like they use in NASCAR. With this configuration, the intake manifold has a fairly good vacuum. In this case, even though the piston pulls a volume of 100 cubic inches into the cylinder, it is not atmospheric air. Here, you have the 100 cubic inches of the vacuum from the manifold. You can think of this as the opposite of super charging because the cylinder ended up with less fuel and air molecules rather than having more fuel/air packed into the same volume.

Basically, volumetric efficiency is effected by your carb, intake manifold, headers, and cam specs. All of these items effect how much fuel/air will flow into the cylinder. But remember, the more fuel/air that gets into the cylinder, the more power the engine will produce. This is where software programs such as Engine Analyzer Pro and Dynomation can be a big advantage. All of these programs calculate volumetric efficiency for different engine configurations that you enter into the software. This allows you to do your own testing without having to buy the parts until you get the right combination.

THERMAL EFFICIENCY
Getting more fuel/air into the cylinder means more fuel energy is available to make power. Unfortunately, not all of the fuel's energy gets converted to rotating energy. Of the 19,000 to 20,000 Btu per pound of gasoline, typically less than 1/3 ends up as useable horsepower.

Compression ratio, ignition timing, thermal coatings, plug location and chamber design all affect the thermal efficiency (TE). Low compression street engines (smog motors) may have a TE of approximately 0.26. A racing engine may have a TE of approximately 0.34. Because these numbers are relatively small, at first glance there may not seem to be much difference between the street engine and the racing engine. However, when you grind out the math (.34 - .26 / .26), the racing engine produces about 30% more power because of the higher TE.

Finding little improvements to the TE can end up as a significant improvement to the final horsepower that the engine produces. Using the Engine Analyzer Pro software, you can try different compression ratios, coatings, etc. on your computer and see what happens to the thermal efficiency.

MECHANICAL EFFICIENCY
Volumetric efficiency identifies how much fuel/air gets into the cylinder and thermal efficiency identifies how much of the fuel gets converted to useable power, but some of this power is robbed by the engine's moving parts. It takes power to overcome the friction between parts and to run engine accessories such as the water pump.

So, depending on how much fuel gets into the cylinder and depending on how much of the fuel gets converted to workable power, some of this power is used by the engine to run itself. The left over power is what you would measure on a dynamometer. The difference between what you would measure on the dyno and the workable power in the cylinder is the mechanical efficiency (ME).

Mechanical efficiency is effected by rocker friction, bearing friction, piston skirt area, and other moving parts, but it is also dependent on the engine's RPM. The greater the RPM, the more power it takes to turn the engine. This means the faster the engine runs the more the ME drops. Often times the ME is expressed in terms of friction horsepower. Or in other words, how much horsepower is needed just to overcome the friction. This is where computer programs like Engine Analyzer and Engine Analyzer Pro are fun to use because you can try different engine combinations in the software and see how much friction HP the combination creates.