Jim Hill's stretched KR2 has been stretched 14" in the tail, like a KR2S, but doesn't have the extra two inches added in front of the main spar. But it has a KR2S tail (and then some) plus the longer KR2S fuselage, so aerodynamically, it's pretty much a KR2S now. It is very close to stock width (KR2 and KR2S are the same width at the cockpit).

As you can see from this picture, he was one of the first (maybe THE first) to use the Dragonfly canopy. It has a practically brand new canopy in it now. This is where I got the idea. In fact, my first EAA meeting is where I saw this thing for the first time, and the rest is history, as they say! He also was one of the first to do the extra "opera" window in the back.

The paint is like new, although it was put on in 1998 (see more on that down near the bottom). It's actually whiter than these photos would have you believe. Jim's been out in the Pacific for 5 years, and this thing has probably not seen 3 days of sun since it was painted. He came back every four to six months, and made a point to fly it. It would fly right now, but he's no longer current, and is building a Sportsman so he and his wife can do some serious traveling during retirement. It's not exactly "show quality", as it has dull spots of orange peel here and there, but the underlying body work isn't bad at all. It has always been hangared.

If this tail looks familiar, it's because he was the first guy to try on "my" tail. It's enlarged to 7' long, KR2S height vertical stabilizer, and uses the same airfoils that were later put into the AS504x templates that a lot of folks are using today. The tail is also adjustable, just like mine. You can guess where he got that idea. Once dialed in, Jim glassed over it, so I assume it's fairly permanent now. These changes came about after a forced landing required some serious tail work, and he wanted to use my setup on the new incarnation. The elevator is not balanced. The airfoil is the RAF48 (and stock KR2 length), not the newer AS504x, since his wings are original.

Fuel tank is all header, and holds about 18 gallons. Jim reports that will be way more capacity than YOU have!

The radio is a handheld mounted in the panel with mic button on the stick, but seems to work fine. There's an intercom built into the panel. Jim is an electrical engineer, if that tells you anything. The plane has a new battery in it.

The Revmaster cowling doesn't look like it fits properly in these pictures, but none of the screws are in it! It's much better with screws installed.

Gear is Diehl, but nose gear isn't faired in yet. Still, he gets 157 mph wide open, but usually flies it at 145 or so. A nose gear fairing should help out there.

The area around the tail splice still needs a little more work to make it completely un-noticeable.

Engine is now a 2180cc VW, so horsepower is closer to 75 than 60. Being a forward thinker, gross is listed as 1150 pounds. Empty weight is somewhat higher now with the tri-gear and extra tail length. he reports stability is "much improved" with the new tail and extra length over the original KR2.

Engine started life as a HAPI, but Jim rebuilt it about 20 flying hours ago (1998). I "helped" him put the engine back together one afternoon. Most memorable about that episode was that when I went to install the oil pump, there was no cam gear in there to slide the pump drive into! Fortunately, the case halves weren't set yet, so we decided we'd put the cam gear in after all. It's now a 2180 with Force One bearing and hub. It has a GPASC electronic ignition and a Slick mag as a backup.

Cabin heat is not hooked up at present (lower left), so bring your long johns when you fly it away. All it needs is another carb heat muff on the passenger side.

Jim's based at M38, Hazel Green, Alabama, on a 2700' runway, but only 40' wide. That would explain why Jim was the "spot landing" winner at several Gatherings years ago! 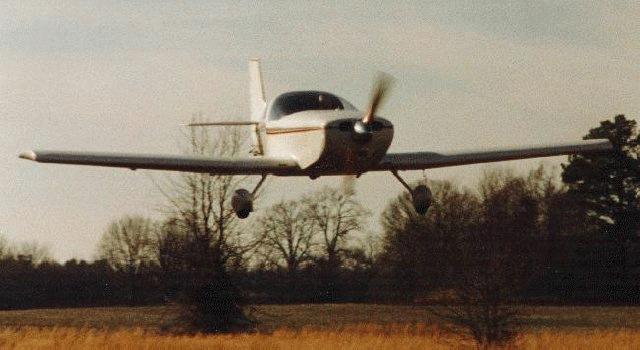 Here's a shot of Jim's KR before it was stretched and converted to tri-gear.

Jim Hill's KR2 was damaged a while back in a forced landing after a carburetor problem (he thinks) silenced his engine immediately after takeoff. The resulting high speed landing in a cotton field broke the canopy, cowling, and the tail. The reconstruction effort yielded a KR2S-like 14 inch stretched tail, as well as trigear and an engine rebuild.

Jim's engine was originally a HAPI conversion, which has been upgraded to the Force One hub, among other things. Note the homebrewed aluminum prop spacer.

The Posa (float bowl model) was replaced with a Revflo.

Here's a nice view of the carb heat setup, utilizing a door spring for heat transfer.

This panel gets the job done with no clutter. The aluminum cylinder lookin' things between pilot and passenger's legs are the familiar Ces*na wing root cabin air vents. Pull up and you get a blast of air between your legs. It don't get no better than this.

Although you can't tell it from the picture, Jim's ears and cheeks were flappin' in the breeze when he firewalled the throttle after breaking in the cam.

A ground plane, I presume...

Yep, it's a real effort to stand two feet behind a huge fan propelled by a 75 HP engine. I was amazed at the howling power available. Shouldn't OSHA require fan blade guards?

These are Jim's cabin air inlet ducts, just outside of the prop stream.